The structure of this post was influenced by the tenth chapter of An Introduction to Statistical Learning: with Applications in R by Gareth James, Daniela Witten, Trevor Hastie, and Robert Tibshirani.

When attempting to understand $n$ observations measured over $p$ features $X_1, X_2, \ldots, X_p$, $p$ is often quite large. When this is the case, it is not feasible to plot our data entirely via two or three-dimensional scatter plots and accurately understand the larger dataset. By only viewing two or three features at a time, we simply lose too much information, especially when $p$ is greater than 10 or 20.

PCA allows us to do just this by finding a low-dimensional representation of a dataset that contains as much of the variation as possible. The idea behind PCA is that each of the $n$ observations lives in $p$-dimensional space, but not all of these dimensions are equally interesting. PCA attempts to find a small number of dimensions that are as interesting as possible, where interesting is measured by the amount that the observations vary along each dimension. These small number of dimensions that contain as much variation as possible are referred to as principal components. Each of the principal components found by PCA is a linear combination of the $p$ features.

The first principal component of a set of features $X_1, X_2, \ldots, X_p$ is the normalized linear combination of the features

that has the largest variance. Here, normalized means that $\sum_{j=1}^{p} \phi_{j1}^2 = 1$. The elements $\phi_{11}, \phi_{21}, \ldots, \phi{p1}$ are referred to as the loadings of the first principal component. Together, the loadings make up the principal component loading vector $\phi_1 = (\phi_{11} \phi_{21} \ldots \phi_{p1})^T$. Note, if we did not constrain the loadings such that their sum of squares must equal one, these elements could be arbitrarily large in absolute value and would result in arbitrarily large variance.

There is a nice geometric interpretation of the first principal component as well. The loading vector $\pi_1$ with elements $\phi_{11}, \phi_{21}, \ldots, \phi_{p1}$ defines a direction in feature space along which the data vary the most. Projecting the $n$ data points $x_1, \ldots, x_n$ onto this direction gives us the principal component scores $z_{11}, \ldots, z_{n1}$ themselves.

After computing the principal components, we can plot them against each other to produce low-dimensional views of the data. Geometrically, this is equivalent to projecting the original data down onto the subspace spanned by $\phi_1$, $\phi_2$, and $\phi_3$ (in the event where we calculated the first three principal components), and plotting the projected points.

In the below left image, we see a scatter plot of a randomly generated two-dimensional dataset. The first and second principal components of this dataset have been indicated via arrows. In the right image, we see the same data projected onto the first and second principal components. Specifically, we are seeing the scores for each observation. To clarify this, I have marked the same observation as red in the left and right panels. Notice in the left panel, the red point contains the most positive x value. The same point shown on the right panel has been projected into the new two-dimensional space of the principal components. While it still has an extreme value, the projected value of the point just to the left of it onto the first principal component is more extreme. This point corresponds to the point with the most positive y value in the left panel.

Note, that the singular value decomposition used to solve for principal components are unique up to a change in sign. Thus, PCA is not guaranteed to always return the same signs on the same input features. scikit-learn’s implementation of PCA does not change sign on repeated iterations on the same input dataset, but it does not guarantee which values will be positive or negative. This explains why the red point is on the right in the left panel, and the left in the right panel. For more information, see this Stack Overflow thread.

The below code snippet was modified from Jake VanderPlas’ Python Data Science Handbook. 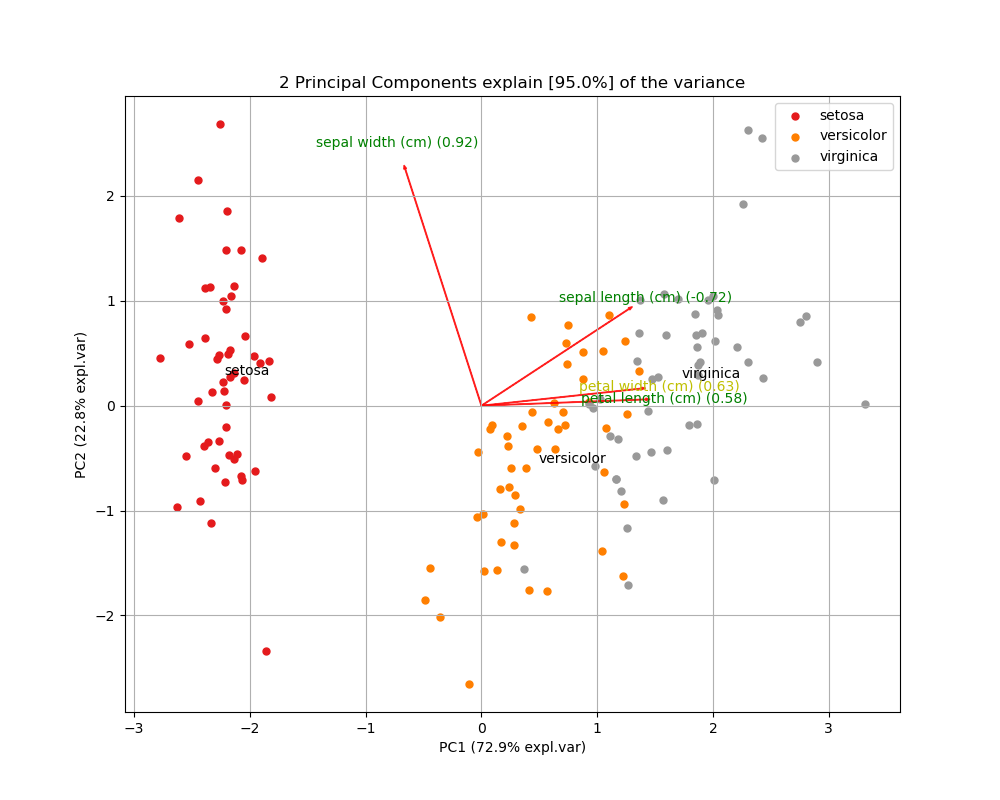 Another Interpretation of Principal Components

To expand on this, the first principal component loading vector is the line in $p$-dimensional space that is closest to the $n$ observations, where closeness is measured via average squared Euclidean distance. Thus, the first principal component satisfies the condition that it represents a single dimension of the data that lines as close as possible to all of the data points. Therefore, this line will likely provide a good summary of the data.

When performing PCA, the variables should be scaled such that they have mean zero and standard deviation one. If we did not scale the variables such that they had standard deviation one, we would find that unscaled variables with high variance would be disproportionally representing in the first few principal components. This is particularly true when some features are measured in much smaller units, and thus can take one a much larger range of values (such as dollars compared to thousands of dollars).

In addition, we would find that changing the units of our variables also changes the principal components. Because it is undesirable for our principal components to depend on an arbitrary choice of variable scaling, we typically scale each variable to have standard deviation one before we perform PCA. In situations where all the variables are measured in the same unit, we may not do this, but we should still center our variables such that their column means are zero.

The Proportion of Variance Explained

When performing PCA, we are often interested in knowing how much of the variance in our dataset is or is not explained in the first few principal components. More generally, we are interested in knowing the proportion of variance explained (PVE) by each principal component. Assuming the variables have been centered to have mean zero, the total variance in a dataset is defined as

and the variance explained by the $m$th principal component is

Thus, the PVE of $m$th principal component is a positive quantity given by

Below is a scree plot showing the proportion of variance explained versus principal components. In contrast to the above use of the pca package, but this example I’ll use the scikit-learn API directly.

We can also plot the cumulative proportion of variance explained versus principal components. 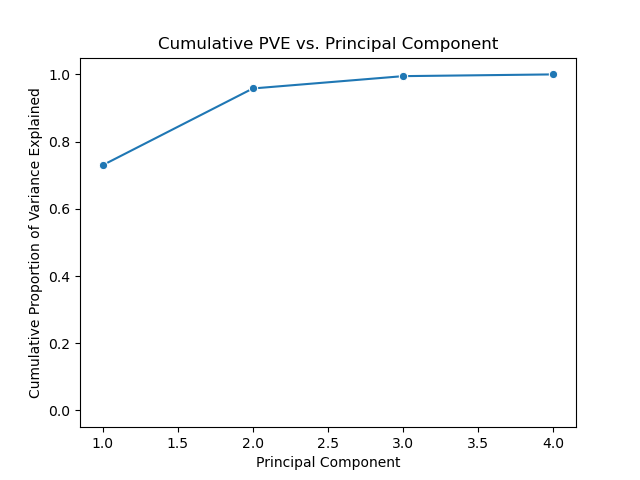 Deciding How Many Principal Components to Use

We can also use the statsmodels package to perform principal components analysis.