In this post, I’ll be exploring quadratic discriminant analysis. I’ll compare and contrast this method with linear discriminant analysis, and work through an example using scikit-learn and the slimmed down Titanic dataset from one of my prior posts on logistic regression.

The structure of this post was influenced by the fourth chapter of An Introduction to Statistical Learning: with Applications in R by Gareth James, Daniela Witten, Trevor Hastie, and Robert Tibshirani.

Both LDA and QDA classify results by using estimates of the underlying Gaussian distribution the observations are drawn from in Bayes’ theorem, and then classifying an observation to the class for which the posterior probability $Pr(Y = k \vert X = x)$ is greatest. In contrast to LDA however, under the alternative assumptions of QDA, the Bayes classifier is equivalent to assigning an observation $X = x$ to the class for which

So, the QDA classifier takes estimates for $\Sigma_k$, $\mu_k$, and $\pi_k$ and plugs them into the above equation to calculate $\delta_k$. Then, the observation is assigned to the class for which $\delta_k$ is largest. Unlike in linear discriminant analysis, $x$ appears as a quadratic function in the above equation. This is why QDA is named as it is.

When to Prefer LDA or QDA

When would we prefer LDA over QDA, or vice-versa? In general, LDA tends to perform better than QDA when there are relatively few training observations. In contrast, QDA is recommended when the training set is very large, or if the assumption of a common covariance matrix for all $K$ classes is clearly not reasonable.

Consequently, LDA is less flexible classifier than QDA, and thus has significantly lower variance. That is, when trained on new training sets, the model will tend to produce similar results (i.e., a lower variance of the predicted values). However, there is a trade-off here. If the assumption that all $K$ classes share a common covariance matrix is untrue, then LDA can suffer from high bias. That is, the model will be strongly effected by the characteristics of the training set, and will not be able to capture the true relations between the predictor and response variables (i.e., the model will be biased towards a particular training set).

Thus, LDA prefers better when there are relatively few training observations because reducing variance is crucial. In contrast, QDA is preferred when the training set is very large, as the variance of the classifier is not a major concern.

After fitting our model, the correct classification score for QDA is approximately 0.647. We can also view the model’s precision, recall, $F_1$ score, and accuracy using scikit-learn’s classification_report function.

For comparison purposes, let’s perform a linear discriminant analysis on the same predictor and response variables.

Interestingly, our LDA model has a correct classification rate that is exactly equal that of our earlier QDA model. However, the precision, recall, and $F_1$ score values have changed slightly.

Finally, let’s compare our two models by plotting their ROC curves and comparing the area under the curve for each. 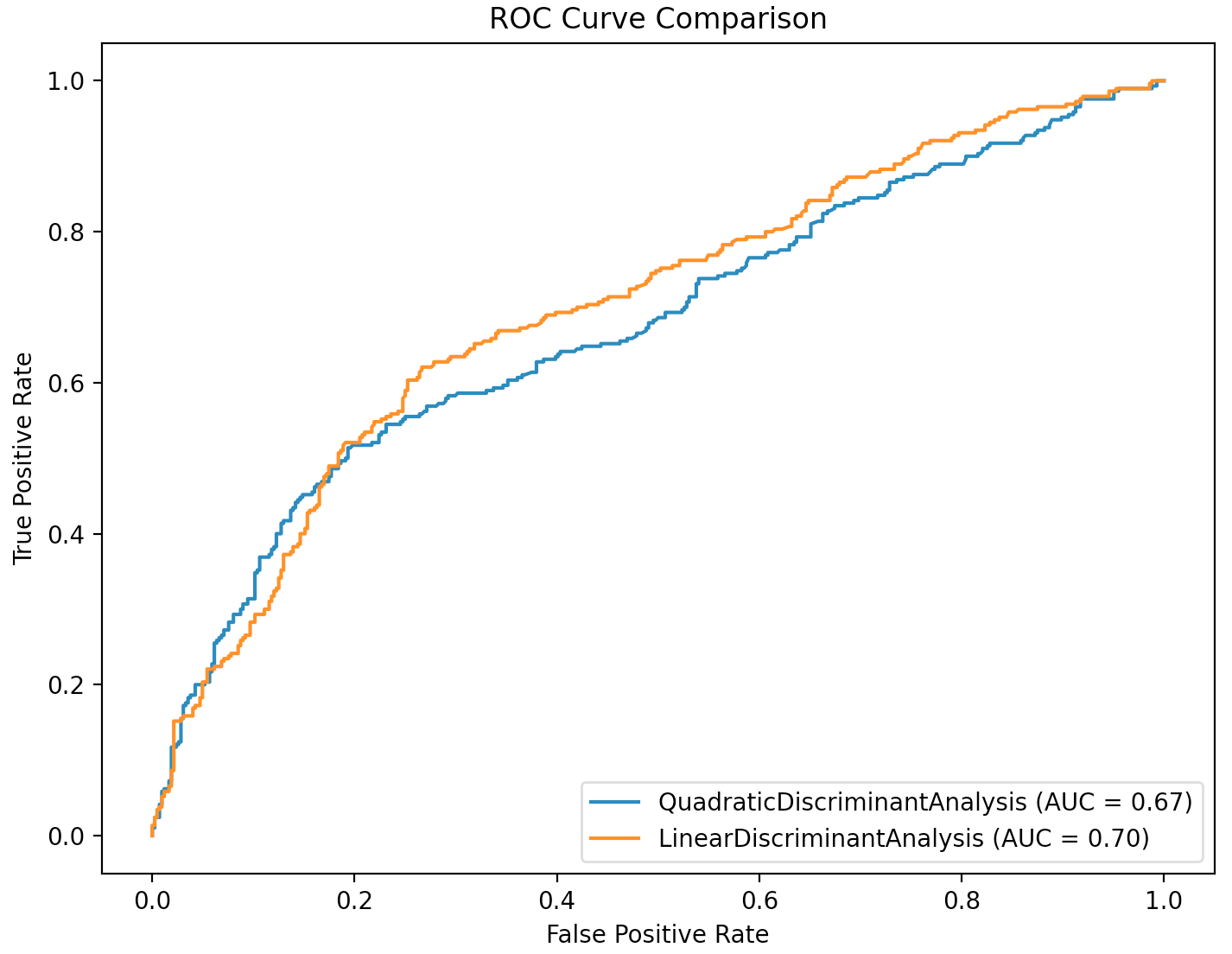 From above, we see that the AUC value for our LDA model is slightly higher than that of our QDA model, indicating the LDA model is a better performing classifier, at least on our training data.